Our 8-year-old daughter is a multilingual child. She speaks four languages, and can read in just as many. How did we get her reading in these languages? Was it easy? Or, is she just gifted? Did she have any particular difficulties? These are just some of the many questions people ask themselves and ask us about multilingualism and learning to read.

How did we get our child to speak four languages?

From birth, our daughter was cradled in three languages: English, French and Italian. Spanish came later. For us, it has always been important pass on to her our mother tongues, English and French, as well as the language of our country of residence, first Italian and then Spanish.

We adopted the famous “one language, one person” method.

I always spoke to her in French, and Adam in English. Since our neutral language is Italian, her ear has always been naturally attuned to it from a very early age. She was also exposed to it at her nursery in Rome, and through our many Italian friends. Indeed, her very first words were in Italian. On moving to Spain, Spanish then became her language of socialization outside the family nucleus, that is in school, shops, cafés and restaurants, with friends, during after-school activities, and so on.

We often hear that multilingual children have difficulties learning to speak, that they learn to speak late or speak very little.

Well, that’s both true and false. It’s true if you want to enumerate the words spoken in each language, but false if you take all the languages on board. For example, most 3-year-old monolingual children can count to 10, while a multilingual child may stop at 5, but will be able to do so in all languages. So, in the end, the multilingual child can accumulate a greater total number of words, though many of them may remain hidden to any individual monolingual interlocutor. Thus, it’s not a question of late development, far from it.

Let’s not forget that the vocabulary flourishes with reading.

The more you read, the more words you learn.

That’s why we’ve never worried about our daughter’s vocabulary. It didn’t matter to us if, at three years old, she spoke a little less than her classmates. Of course, plenty of people told us we were confusing her, that she should stick to the language of the country she was growing up in, at least at first, and that her sentences were all jumbled up. We know it can be easier to criticise than to praise, and even more so when the object of that criticism doesn’t fit into society’s normal mould.

How did we deal with criticism of our method?

We completely ignored it of course! Without the least regret. Multilingualism is a wonderful opportunity, and represents an opening of the spirit to everything the world has to offer. But, it isn’t an easy path to take, and it doesn’t just happen by itself. It has to be important to a child’s parents or guardians. Whenever she got frustrated with trying to express herself correctly in the correct context, we were there, step by step, encouraging and reassuring her.

In practical terms, how did we get our child reading in various languages?

Like many parents, we read to her and with her every single night. But we also travelled lots, spent time with our families, both in the UK and France. We made her understand the importance of languages by getting her to talk with our families, play with her cousins, meet other children at airports and museums and parks in each of the respective countries. Once the oral foundations were in place, we gradually integrated more and more reading. In English, Adam followed the phonics methodology of Oxford University Press’ Biff, Chip and Kipper, focusing on one main sound at every read. In French, I used the classic Boscher sequential syllabic approach.

At what age did she begin to actually read on her own?

We started the real push for learning to read at the age of five, so that she could focus a little more on the Spanish side of things at the start of compulsory primary school. This meant that, when she started, at the age of six, she already knew how to read a few sentences in English and French, and could recognize all the various phonetic sounds of both languages. After meeting with her teacher, we agreed to dial back English and French for a bit, to allow more time for Spanish books. By the second term, she was already reading in Spanish. By the third, she was doing it on her own.

Growing up, she’s always been surrounded by books, and has always seen us read. This is one of the keys to reading for a child, that she sees others doing it! And so, our local international bookshop, Picasso, became one of her favourite stores, and her bedroom rapidly became a library.

So, at the age of 6, she was speaking in Spanish, English, French and Italian, and reading fluently in Spanish.

What about reading in the other languages?

Here, we had to insist a little more. But not force it. Let’s be clear, we never pressured her, we just gave her the opportunity to read on her own in Spanish, or read with us in our languages. As with speaking, we made a concerted effort to help her understand that reading in other languages was important, and that it would open up the world to her, or rather many worlds.

To start with, we focused on reintroducing English. She already knew the sounds, and was studying a little English at school, but the real key was finding a book she would simply fall in love with.

Adam searched high and low for the right book. Something not too scary, not too old, not too girly. He read reviews online, asked the whole family for advice, and sought recommendations from friends on what their kids were reading. Scouring Waterstone’s bookshops in the UK, he showed her a succession of book covers and reading out all the blurbs. He guided her in choosing what he thought she would enjoy the most, according to her own character, but always let her choose in the end. The first real novel she got hooked on was the first of Pamela Butchart’s “Baby Aliens Got My Teacher” series.

From that moment on, she was well away with reading alone in both Spanish and English. Effortlessly, she would alternate between the two languages on a whim. And she would dive into whatever she laid her eyes on as she climbed into bed.

What about French then?

With Spanish and English pretty much now in the bag, we began to tiller round to the dear old language of Molière and its challenging pronunciations.

From my mum’s, I had recovered my beloved collection of books from the “Bibliothèque Rose”, or “Pink Library” series. I thought it would be perfect. Alas, no! For two main reasons. First, she had not chosen the books herself, and, second, the language in these books, in the light of today’s French, was somewhat dated. So, she took no real pleasure in reading them.

If I read to her, she would enjoy it, but if I told her that it was her turn to read, she would drag her feet. She started telling me that reading in French was just too difficult. The phonetic liaisons, nasal vowels, all those letter at the ends of words that you simply don’t pronounce, and all the rest of it.

I let it be for a few months. Then, I signed her up for monthly instalments of the magazines “J’aime Lire”, meaning “I like reading”, and the news-based “Images Doc”, published respectively as “Adventure Box” and “Discovery Box” in English. Finally, we were on to something, and back reading in French. With J’aime Lire, she discovered the comic strip of Tom-Tom and Nana, or Tom and Lili in English. That opened the gateway to other comics, such as Asterix, Mickey Mouse, Spirou and Fantasio, and, of course, Tintin! She read the complete series of Tintin issues within just a few days, and has read them three or four times since!

So, finally, what about Italian?

Reading in Italian was introduced through her various Italian babysitters. Learning to read in Italian is pretty straightforward if you already know how to read in Spanish. Indeed, she only had to learn to identify a few distinct sounds, or phonemes, such as the “ch” pronounced as a “k”. In particular, she loves reading Topolino, the Italian version of Disney’s Mickey Mouse comic books.

So that’s how our daughter learnt to read in 4 languages. It wasn’t always easy. We also count on loads of support from her grandmothers, “Nanny” and “Mamie”, who have always read to her and bought her plenty of books, and from her various British, French and Italian babysitters. It was a real team effort.

At any point in time, we could have easily given up and opted for the easy option, that of leaving it up to school to teach her to read, and only in Spanish. But we wanted to give her the opportunity of multilingualism well beyond basic oral expression.

Today, the results are evident. Through reading, her vocabulary has been enriched enormously in each language. She has also discovered the culture behind each language. She can talk about the adventures of Tintin, Captain Haddock and Professor Calculus until the cows come home. And we’ve been able to explain to her the various facets of colonialism, and other themes such as the exploration of space.

What’s the next step?

I would love to read Harry Potter with her in its original language. It’s the dream of any true non-English mother tongue HP fan. She’s reluctant at the moment because she still thinks it’s too scary. However, I know that one day she’ll say to me, “Mum, let’s just read the first chapter together”. And, just as soon as our backs are turned, she’ll carry on reading on her own! Because our multilingual child has become a true bookworm.

What about our youngest child?

Well, we still at the cooing and babbling stage. But she’s exposed to all four languages the same. Just as with our elder daughter, we’ll try our very best to teach her to speak and read in different languages. We will not force her, simply encourage and reassure her. And we’ll give her all the tools we can to help her learn. We may have to adapt our method. Who knows? Everything in its own time. Everyone’s learning path is different. Every child is different. And that’s just as well. 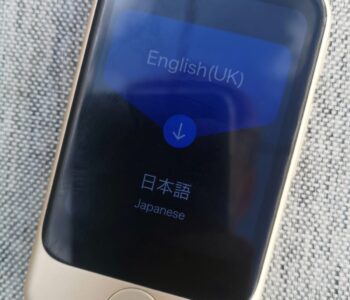